The Cycling Ireland Off-road Commission is delighted to announce our new Chair – Steve Donnellan. Steve has been a member of the Mountain Biking Association of Dublin (MAD) since 2008. He has previously served on their committee for five years, including three years in the role of Chair. Originally from Sydney, Australia, moving to Ireland in 2003, Steve has been involved with cycling since the early 1990s. He first got into road cycling, followed by cross-country racing and more recently into enduro. Through his involvement with MAD, Steve has had a long role in supporting XC racing and held the role of race director for MAD’s NPS XC round over the past few years.

Steve is looking forward to assisting the Commission in its continuing development across all off-road disciplines. 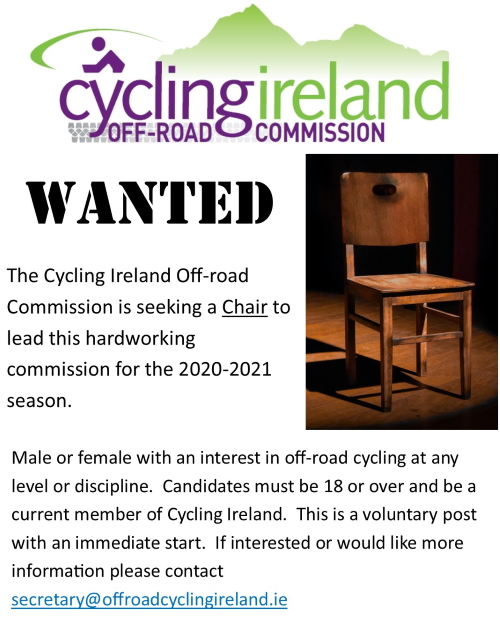 The Annual General Meeting (AGM) of the Cycling Ireland Off-road Commission (CIORC) took place via Zoom on Sunday 25 October 2020.
The minutes from that meeting are given here.

CHANGE OF DATE FOR SUBMISSION OF MOTIONS AND NOMINATIONS.

This is the second notification of Cycling Ireland Off-road Commission Annual General Meeting (AGM). This meeting will take place on Sunday 25 October 2020 at 19:30 and will be done via a Zoom call. Please note that pre-registration is required in order to gain access to the virtual AGM. Minutes from the last AGM can be found here.

Positions on the Commission
The commission will be made up with the following positions. All positions are available for renewal. The position of Chair is a 2 year post. The other positions are 1 year roles.

The Cycling Ireland Off-road Commission will be holding their Annual General Meeting (AGM) on Sunday 25 October 2020.
The AGM will be held virtually. Time to be confirmed. Attendees will be asked to register in order to obtain a link to the event. This will be made available in due course.
All roles on the commission are up for renewal.

The purpose of this of this document is to set out the selection process for Irish riders to compete in the 2020 UCI Cyclocross World Championships in Dübendorf, Switzerland (1-2 Feb 2020).  The selection is open to riders in the following categories: Junior men, Junior women, Under 23 men, Under 23 women, Elite men and Elite women.

END_OF_DOCUMENT_TOKEN_TO_BE_REPLACED

This is the second notification of Cycling Ireland Off-road Commission Annual General Meeting (AGM). This meeting will take place on Saturday 12 October 2019 – Carlton Hotel Dublin Airport. Meet at 13:45 with start time at 2 pm. Tea and coffee will be available at the break. NOTE: The deadline for submissions of nominations and proposals is close of play on Saturday 5 October 2018.
END_OF_DOCUMENT_TOKEN_TO_BE_REPLACED

This is the first notification of Cycling Ireland Off-road Commission Annual General Meeting (AGM).  This meeting will take place on Saturday 12 October 2019 – venue to be confirmed (Dublin based).

Positions on the Commission
The commission will be made up with the following 9 positions. The position of Chair is for 2 years with Tim O’Regan staying on in that position.

END_OF_DOCUMENT_TOKEN_TO_BE_REPLACED

The UCI has confirmed selection of two Irish riders to attend their Cyclocross training Camp in Aigle in Switzerland (1-6th October 2019). Best of luck to Lucy O’Donnell and Darren Rafferty.

Each year the camp is hosted by a top international cyclocross coach or former CX professional. Previous versions have seen Sven Nys, Rudy de Bee and Sven Vanthourenhout passing on their experience and knowledge to the riders.

The Irish Downhill and Cross-country National Championships are both being held over the weekend of the 20/21 July 2019. Deadline for entry for both events is Sunday 14 July 2019.

The Downhill Championships are being held at Kilbroney, Rostrevor Co. Down by Rostrevor MTB Club. A Technical Guide for the DH event is given here. More details can be found on www.irishdownhillseries.com/.

The Cross-country (XC) National Championships are being held at Tracton Woods in Co. Cork by MBCC. A Technical Guide for the XC event is given here. More details can be found on www.irishxcnps.ie/.