As usual the Saturday was for practice with the riders arriving the previous night or early in the morning. The caravan park was full of camper vans and tents and the bohemian, chilled out atmosphere descended across the park as the riders settled in for the weekend, got themselves signed on, kitted up and started heading up the climb to begin scoping out the course. Saturday started dry and warm and the track was running fast. The mini bus and trailers doing the uplifts were kept busy. Riders were either riding certain sections or doing the full run from the top of the track before heading back to base to discuss line choices, bikes, kit, holidays, coffee etc.. The finish area was in a separate field with a wide barriered finish circle, inflated gantry and music pumping out of two large speakers. The course entered the field over a newly built jump to provide some air time for the riders and a photo opportunity for the many photographers. Slightly further back along the course was a gap jump from the road section, another crowd pleaser. The main track incorporated a large section of the established trail centre with the famous Hecklers Rock a short clamber up from the forest road.

The final 2 hours of practice day seen the clouds come in and heavy rain arrive on site. This upped the stakes on the track as everywhere was now wet and slippery. Through the heavy rain the riders kept on practicing, studying the lines, seeing how the track had changed.

When practice was finished there was a series of youth races which finished into the main arena. Then it was time to clean the bikes and pitch down for the night.

Race day arrived and thankfully the early morning grey and light rain lifted to make for a great summer’s day in the park. Fastest rider on the day was Jacob Dickson (Rostrevor MTB Club), now riding for Giant Factory Off Road Team, in a time of 2:33.8. His race plate was number 1 and that’s how he finished overall and in the Senior men’s category, which seen a big turn out of 41 riders. Jack Crowley (021 racing) was second in this category with James MacFerran (Shimna Wheelers) third, just 0.2 seconds separating these two.

There were 3 Masters categories on offer for the championships. In the M30 category Colin Ross finished in a time of 2:40.0 with Stephen Beattie (PLUSHmtb) second and Ian Coates finishing off the podium. ChainReaction Cycles riders filled the M40 podium with Glyn O’Brien taking the top step after his race run of 2:46.3 with Michael Cowan second and Dale McMullan third. Alastair Maclennan won the M50 race in a time of 2:57.5 with Malachy O’Boyle second and Mark Sullivan third.

This year the category ‘Hardtail’ was included with 4 riders braving the course on bikes without the full suspension. Sean Di Fiore was fastest with Stephen McDonald (Team MoCo) second and James Gaston third. Stephen was also competing in the M40 category where he finished 11th. Two bikes = double the fun.

Many thanks to the hard working team at Rostrevor Mountain Bike Club along with friends and supporters for pulling the event togehter. Thanks to Newry, Mourne and Down District Council and to all the sponsors for their support.

The next round of the Irish Downhill Series takes place on 12/13 August at Bree, Co. Wexford. More details can be found on www.irishdownhillseries.com. Best of luck to the riders heading over the British DH series in Moelfre, Powys on 29/30 July and to the riders heading to the World Cup round in Mont-Sainte-Anne, Canada on 5/6 August. 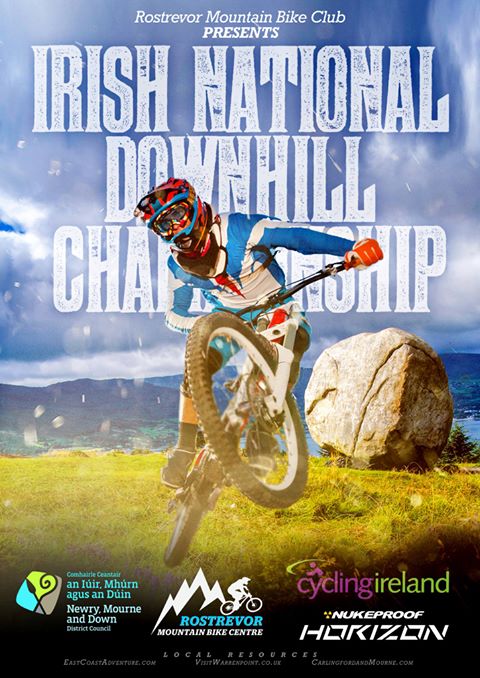